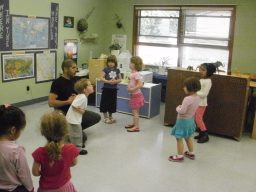 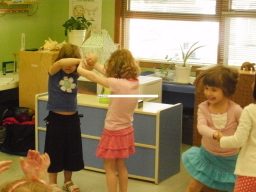 The children at Ebenezer Child Care Center’s Mequon location have been having a lot of fun in their Early Movers, creative movement program designed children ages 2-4 every Thursday morning from 10am-10:30am. In it, they explore dance through creative child appropriate games which helps them develop kinesthetic, visual, and tactile awareness. They also learn to improve their concentration by using musical instruments and stimulating their auditory senses when responding to sounds (and music) they make or hear. In addition, the children improve their social skills and vocabulary when expressing what they learned to other fellow movers during a moment of reflection at the end of the class.

According to Lisa Lenyard, Mequon Center Coordinator “Early Movers is a great program which helps to improve a child’s self esteem, gets them moving and excited about exercise.”

Early Movers also includes a series of “Brain Dance” exercises which were developed by Anne Green Gilbert, the owner of the Creative Dance Center. “Brain Dance is comprised of eight developmental movement patterns that healthy human beings naturally move through in the first year of life. As babies, we did these movements on our tummies and backs on the floor. However, going through these patterns at any age, (while sitting or standing) on a regular basis has been found to be beneficial in reorganizing our central nervous system. Repeating these patterns over time may also help us fill in any missing gaps in our neurological system due to birth trauma, illness, environment, head injury or not enough tummy time as a baby” (creativedance.org/about/braindance).

The Early Movers program was created by Edwin Olvera, a proud parent of a darling toddler enrolled at our Ebenezer Child Care Center in Mequon. He is also a professional dancer, fitness trainer and teaching artist who has traveled araound the world over the past seven years with the Pilobolus Dance Theater. Edwin’s other credits include teaching Master’s classes and workshops in creative movement for Pilobolus Institute, dancing in the opera the “Magic Flute,” appearing in television shows like Sesame Street, and commercials for the NFL Channel. He has also been featured multiple times in Dancer and Dance Magazines for his performance as a modern dancer/entertainer. His most recent project has been with Cedric Gardner (SYTYCD, Step UP 3-D, Yo Gabba Gabba) in which they collaborated on choreography for AMP’d Limited of Waukesha.