For 25 years, Ebenezer Child Care Centers has been fortunate to have Beverly Anderson (or Bev to many) leading our organization as our Executive Director. In this often-thankless role, Bev is 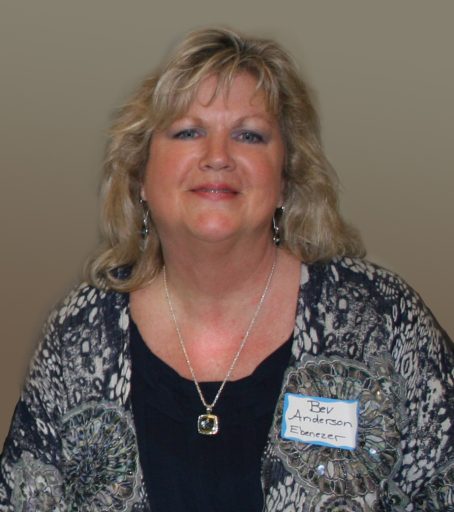 responsible for the overall administration of all policies, regulations, budgets, and program components for the entire agency, which currently consists of four locations. This includes interfacing with the center’s Board of Directors, 90 staff members and over 400 families; conducting community relations; and lobbying for children’s interests. One of her strengths is having a vision for the future to keep Ebenezer strong. In 2013, she saw the growth that was happening in the Oak Creek Community and sought out property to purchase and build a brand new 15,000 square foot facility that opened in 2014 and has a capacity of 166 with strong enrollment today. In 2017, one of Bev’s biggest focuses has been helping our Wauwatosa facility find a larger location to move into on the West Allis/Wauwatosa border, so it can meet the needs of more families. 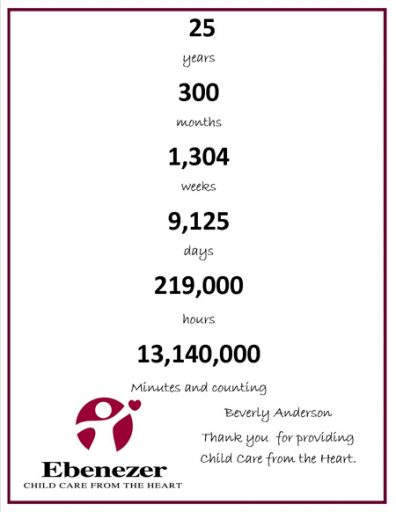 Milwaukee but throughout the entire state. She has worked tirelessly to unite the child care industry in Wisconsin by serving as a President of the Wisconsin Child Care Administrators Association from 2014-2016; Vice-President of the Board for two terms; Membership/Marketing Chair; Conference Coordinator for 2001, 2002, 2003, 2009, and 2015 Conferences; and Past-President from February 2006 – February 2008.

Bev is also the current Chairperson and is a Co-Founder of the Milwaukee Child Care Alliance (MCCA) which has been in existence since 2003. She was also a member of the Early Childhood Council of Milwaukee County from 2004 – 2008; a Board Member for the Better Business Bureau of Wisconsin from 2005 – 2008; and a National Accreditation Commission (NAC) Commissioner from 2005 – 2008. If that isn’t enough, she is also a member of the Association of Early Learning Leaders (formerly NACCP), Wisconsin Council on Children and Families (WCCF), Wisconsin Early Learning Coalition, and Child Care Forum (DCF Licensing Meetings).

When receiving the Wisconsin Child Care Administrators Association Individual Recognition Award in 2013, she was described as the “go to” person for so many administrators. She is incredibly organized and while juggling a workload that would be impossible for many other women, Bev goes out looking for more to do! As one colleague was quoted, “I’m always amazed at her ability to have such a solid grip on virtually every issue that is influencing the field.”

Here’s what some of her staff have to say about her:

“Bev is a dedicated individual who advocates for family and children in early education. She is knowledgeable in our profession and leads with confidence and grace. Most importantly she doesn’t hide in the shadows during hard times, but stands on the front line to fight for what’s right for people of all walks of life.”

“Bev is passionate about bringing change for those of us who work in early care and education.”

Bev has the respect of so many of the influential people in our state who are decision makers for early childhood care and education.

If you haven’t met Bev personally, you can rest assure she has still made your job easier for you by standing up for children and families in our state. She brings honesty and integrity to all she does.

Bev holds a Bachelor of Science Degree in Pre-School Education and Child Development from the UW-Madison, and Ebenezer is so grateful for all she has done for us over the past 25 years.

Thank you Bev for all of your wonderful years of service!